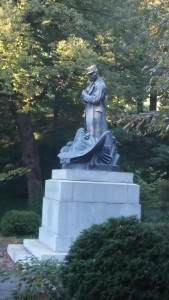 The large statue of Milan Rastislav Stefanik was located at Jeptha Wade, near the Art Museum, since 1924 when the Slovak League of America sponsored the monument’s creation and dedication. Because of the ongoing road construction there, the statue was relocated to the Slovak Garden this year and a rededication was held on Saturday, Oct. 26. Many Slovak organizations placed a wreath at the monument and the foundation of Czechoslovakia on October 18, 1918 was acknowledged.

Milan Rastislav Štefánik, 1880-1919, was born in Košariská, Slovakia. He was an astronomer, art connoisseur, general, politician, diplomat and one of the co-founders of the country of Czechoslovakia (now Czech Republic and Slovakia).